Final tests for the Monteverde Project 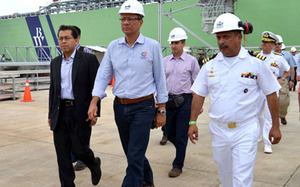 Yesterday, authorities of the Ecuadorian Government,  after a technical inspection of the Monteverde project for the storage of liquefied petroleum Gas (GLP), reported that it has reached the final testing stage.

Jorge Glas, President in charge, travelled together with officials of Ecuador Oil Fleet (Flopec, for its spanish acronym), which are responsible for the construction, the maritime terminal and storage plant, that are part of this work located in Monteverde, province of Santa Elena.

General manager of Flopec, Danilo Moreno, said that the project, whose construction began in 2009, is 100% complete in the mechanical aspect.

Moreno also pointed out that at the moment the project is in the third step of the test, which is to offload two by-products of LPG, butane and propane, into the storage tanks, in order to verify if the equipment is properly calibrated.

The third component of the project is a pipeline which will be used to transport the fuel from Monteverde to Chorrillo.

An information brochure prepared by Flopec points out that the “integrated operation” of the project will take place in April of next year.