Five energy projects leave a balance against the country 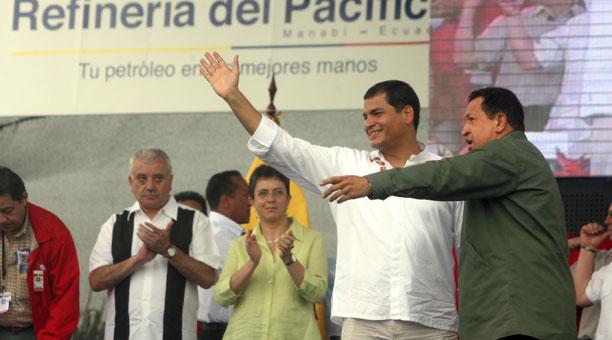 “In five years we will be here to inaugurate a tremendous refinery,” on July 15, 2008, the then Venezuelan president, Hugo Chávez, made a visit to Manabí to see the refining complex of the Pacific.

Ecuador and Venezuela ratified, in that meeting, ambitious joint projects, but almost 10 years later the results have not been as expected. The exploration of gas in the Gulf of Guayaquil, by PDVSA, was unsuccessful. For the Pacific Refinery and the increase in oil production in the Sacha field, joint ventures were created, which will be liquidated. While the Great National Mining is registered as inactive. Petroecuador’s participation in the exploration of the Orinoco Belt, in Venezuela, did not materialize either. PDVSA failed to complete the investment In September 2009, the joint venture Rio Napo was created, with a 70% stake in Petroecuador and 30% in the state oil company Petróleos de Venezuela (PDVSA) to operate the Sacha field. The goal was to increase their production. In 2010, the production was 50,673 barrels per day on average and for 2011 it fell to 49,520. This led to the signing of a new contract for 15 years

“Of that amount, 30% corresponded to PDVSA Ecuador,” said the Ministry of Hydrocarbons. The Venezuelan company had to contribute an additional amount of USD 94.2 million that, according to an audit report issued in 2017 by the Hydrocarbons Regulation and Control Agency, did not. In 2013, the year in which Petroecuador transferred its shares to Petroamazonas, an increase in production was achieved thanks to the discovery of new reserves.

The current production is 66 200 barrels per day. In 2016, Río Napo entered into liquidation process, by order of the Superintendency of Companies. In a report from the Office of the Comptroller of 2017, there were deficiencies in the administration of resources in Campo Sacha and lack of supervision in the fulfillment of the activities. Ecuador did not enter the Orinoco zone In the First Energy Summit, in April 2007, in Margarita (Venezuela), Presidents Rafael Correa and Hugo Chávez agreed that the Venezuelan company PDVSA would participate in the ITT field in Ecuador, and, for its part, Petroecuador was in the exploration of oil in the block Ayacucho 5, in the Orinoco strip.

But 11 years later, Petroamazonas, which took over Petroecuador’s oil exploration and exploitation phases, does not have operations in that area. PDVSA did not enter the ITT either. “Petroamazonas is the sole owner and responsible for the operation of this field (ITT),” said the Ministry of Hydrocarbons. For René Ortiz, former Secretary General of OPEC, the commitment was not fulfilled because the offer made by Pdvsa to Petroecuador was “insignificant”: a 5% stake in the Orinoco. For the oil analyst Luis Calero, what happened there was a lack of political decision of the Ecuadorian Government “to enforce Venezuela an obligation assumed in an agreement.”

The mixed company Refinería del Pacífico was incorporated in 2008 with 51% of Petroecuador and 49% of Petróleos de Venezuela (PDVSA). The share capital contributed by the local firm is USD 236 million and that of PDVSA of USD 227 million, according to the Superintendence of Companies. The previous government estimated the work at USD 15 billion and expected to inaugurate it in 2013.

But a private investor is still looking for financing the project, now called Manabí Refinery. According to a Comptroller’s report, in 2012 and 2013 the Venezuelan oil company did not make the corresponding disbursements of USD 227.48 million, according to the annual investment budget. According to another internal report of the Ecuadorian firm, PDVSA also failed to comply in 2014.

Up to March 2015, USD 1 200 million were invested (without taxes), of which 81% was disbursed by Petroecuador, the rest by PDVSA. After finding inconsistencies, Petroecuador said it makes a balance to the accounts of the Refinery. The entry of a new investor will imply the exit of Venezuela. The referential investment of the project is now USD 5 billion. The Government will initiate a process of liquidation of the joint venture. Gran Nacional Minera, inactiva The Gran Nacional Minera Mariscal Sucre is a mixed economy company formed in 2010 by the National Mining Company of Ecuador (51%) and CVG Minerven of Venezuela (49%).

According to the company’s website, the capital comes from a fund between both nations. In 2010 he received the concessions of El Reventador in Sucumbíos, and the Mompiche project in Esmeraldas. According to the Superintendence of Companies, the Great National Mining Company is inactive; this means that the entity closes its economic activity without proceeding to its dissolution. However, according to Gil Benítez, an advertising analyst for the company, it is still in operation.

In 2009, natural gas exploration began on Puná Island, under the responsibility of Pdvsa Exploración. The company entered into operation following an uncontested award of a “risk exploration” contract, based on a strategic alliance. A year later, this had no results. The first well did not register commercial quantities of gas. In 2011, a new search for gas began in the Gulf of Guayaquil, in block 4, which was not successful either. For these tasks, 3D seismic studies were previously required, but they were not done, which was corroborated by the Ministry of Hydrocarbons. The investment was USD 38 million, which was assumed by PDVSA Exploración. (I)