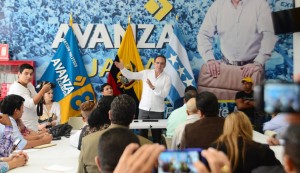 Roberto Cuero, former governor of Guayas who until last year was active in the Alianza PAIS (AP) party, is now part of the Avanza party. He left that position due to a complaint of alleged illicit enrichment, which was dismissed and filed. “There are more people of AP that has joined us,” says the Avanza national leader, Ramiro González.

The party aims to strengthen and add 80,000 more affiliations for submission to the National Electoral Council. This occurs amid allegations from the regime of alleged cases of corruption attributed to Gonzalez when he chaired the IESS, and the call for the judicial confession of the AP former ally for saying that the Isaias brothers financed the first campaign of Rafael Correa.
Source: http://www.eluniverso.com/noticias/2015/11/19/nota/5248878/exgobernador-guayas-deja-ap-irse-avanza

The ruling party has three positions on reelection

Alleged terrorist of the France attacks would have been in Ecuador