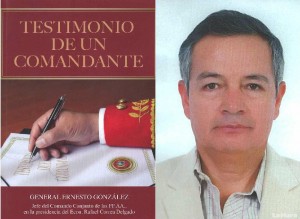 The former head of the Joint Command of the Armed Forces, Ernesto González, who led the rescue operation of President Correa during the police revolt of September 30 (30-S),  spoke in an interview with Radio Vision on the topics that appear in his book: “Testimony of a commander” (Testimonio de un comandante, for its Spanish name), which will be presented on Thursday, January 15.

Among the topics he talked about, are the theses of the kidnapping and the attempt to coup d’etat against Correa during the 30-S.

Gonzalez said: “I would say that the president was withheld, he was not kidnapped in the full sense of the word. As his ministers say (what some of them stated on that date), the president was exercising functions: he declared a state of emergency, hemade contact with the media … “

In his opinion, the decision of Correa of going to the Quito Regiment did not contemplate security protocols. “I got very frustrated with the head of the Presidential Palace and the aide on duty (…). They submitted their reports and, practically, the president was who did not accept the recommendations.” González also referred to an alleged attempt to depose to Correa. “I do not know if previously activities had been carried out to orchestrate a coup d’etat, nor military intelligence warned us,” he said, and admitted that the magnitude of the events surprised him.