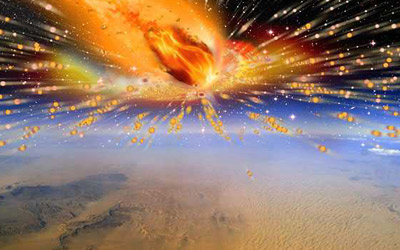 The University of the Witwatersrand (Wits), on Johannesburg, reported yesterday that a team of South African researchers found for the first time the remains of a comet that blew 28 years ago over Egypt when entering the atmosphere.

The explosion destroyed all forms of life around the area of impact, and increased the temperature of the sand up to 2,000 ° C, causing the formation of an impressive amount of yellow silicon crystal scattered over  6,000 km2 of the Sahara dessert.

The team of researchers is convinced of having found “the first exemplary known of the nucleus of a Comet, and not only a rare type of meteorite”, this is due to the study of a mysterious black stone that was found in 1996 by an Egyptian geologist on the inside of a piece of Silicon crystal.

The explosion originated, in addition, microscopic diamonds, a precious stone which is formed with carbon subjected to extreme temperature and pressure.

Professor David Block, said in a statement that the comets are balls of snow mixed with cosmic dust, that are always visiting our skies, however, never before in the history of the matter it has been found a comet over the Earth.

Prior to this discovery, the scientists had only discovered powder rich in carbon in the Arctic ice, or microscopic dust particles in the upper atmosphere.

Nebot confirms his candidacy for reelection