The economic growth mainly of these three countries affected the increase of resources sent by Ecuadorian migrants, according to the Central bank. Remittances sent from abroad to Ecuador increased in the third quarter of the previous year. The flow of money that entered the country increased 7.6% ($ 752.2 million) compared to the second quarter ($ 698.9 million).

According to the Central Bank of Ecuador the reason for the growth of remittances between July and September of 2017 is due to the good performance experienced by the countries where Ecuadorian migrants reside. The United States tops the list of places from which more resources were sent, followed by Spain and Italy. 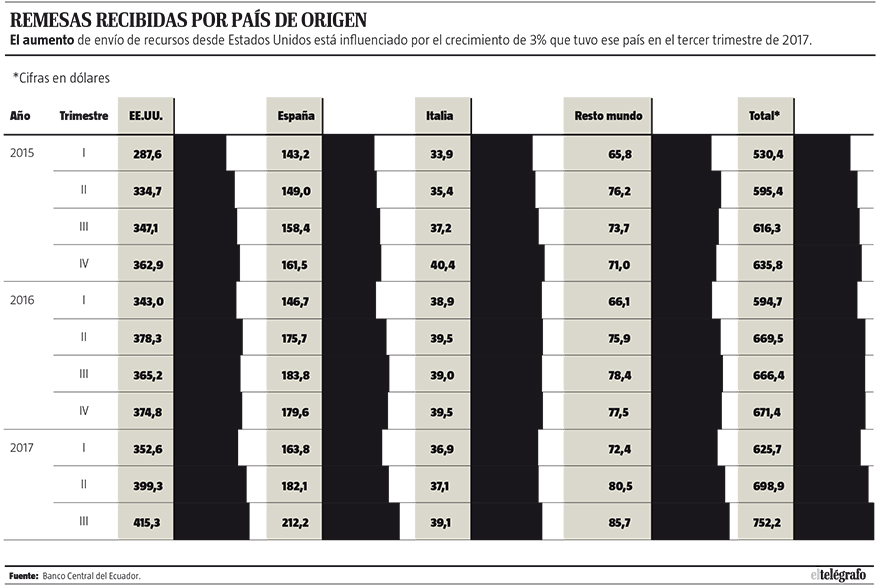 The US gross domestic product (GDP) grew by 3% in the third quarter, despite the fact that the country suffered strong natural disasters in Texas and Florida, reported the National Bureau of Economic Research (NBER). From Spain came $ 212.2 million, equivalent to 16.5% more sent between April and June 2017. According to the National Institute of Statistics of the Iberian country, this economy grew by 0.8% between July and September 2017, which represents 16 consecutive periods of progress.

The Bank of Spain reported that despite the slowdown in employment and trade flows, its GDP would grow by 3.2% in 2017. On the Italian side, remittances to Ecuador totaled $ 39 million or 5.4% against to the previous quarter and 0.1% when related to the third quarter of 2016. The Statistics Institute of Italy reported that this economy grew 0.5% between July and September of 2017 compared to the second quarter of the same year; and expects to close the year with a growth of 0.7%.

Money sent from other countries such as Mexico, Chile, Peru, Canada and Colombia contributed with 5.9% of total remittances. From the United Kingdom, Germany, Switzerland, France and Belgium, 2.9% was channeled.

On the other hand, the flow of remittances sent from Ecuador in the third quarter of 2017, rose by 16.5% ($ 96.5 million) compared to that registered in the second quarter of the same year ($ 82.8 million) and 38.3% more in relation to the same period of 2016. According to the central bank, Colombian and Peruvian citizens sent 60.8% of the total to their countries. The flow of resources sent to Colombia, would be explained by migrants from that country who work in mines, services, etc. (I)