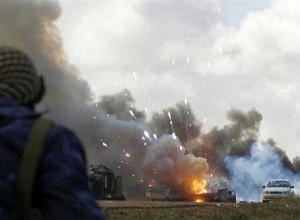 The forces loyal to Gaddafi that were expelled from Misurata, launched an attack to the port this Tuesday. The hostilities injured several African refugees, and forced them to flee the coast in a humanitarian boat.

For two months the access to Misurata has been blocked by forces loyal to Gaddafi, since it is a coastal city located at 200km to the west of Tripoli. The port is the only contact of the city with the outside. Around 14:30, several Grad rockets reached the port. A boat from the International Organization for Migration (IOM) that was evacuating civilians that were trying to escape from the city, retreated 2 km of shore after the attack.

Doctor Jalid Abu Faira, of the main hospital in the city, informed that several refugees were wounded during the bombings, it is expected that some of them perished. Meanwhile the NATO had ordered the IOM boat to retreat from the port, when 20 vehicles of Gaddafi forces approached to the port.