The Galapagos archipelago completes three consecutive weeks registering zero positive cases of covid-19. About 100% of the adult population has been vaccinated against the virus and the number of tourists who arrived on the islands grew by almost 17% in June, compared to the previous month. 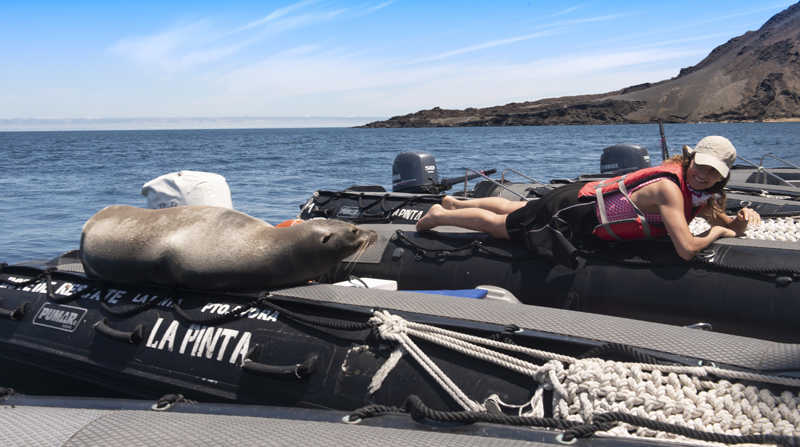 Tourists came to Bartolomé Island to practice diving and other activities.

The high vaccination rate – unprecedented for the country – and the confidence that the province has generated as a safe destination has increased the interest of tourists, but the sector is still pushing for a full reactivation.

The number of 8,698 tourists who arrived in June doubles the number of visitors received since January of this year; but it is still far from the 23,000 a month on average that the islands had before the pandemic, according to the Provincial Chamber of Tourism.

Consuelo Cortez runs the Bay View House lodging establishment in Puerto Ayora, Santa Cruz, which offers independent suites. The business registers reserves of 70% of its capacity for the months of July and August.

“This type of more familiar accommodation has gained space with the pandemic, because sharing areas with other guests is avoided. September and October are low season and we have a good amount of reservations. There are clients who are even booking us for next year,” said Cortez.

The number of tourists and reservations has increased steadily since last month, with a greater number of nationals. Bay View House applies for reactivation a decrease in accommodation prices of 30% per night.

Sectors such as navigable cruises, a business that is based mainly on foreign tourist niches, still registers low activity and a prospect of few reservations.

The tourism that was arriving to the islands was mainly national, but that began to change last month, when 50.74% of the visitors came from abroad.

“The health situation is encouraging and is a factor that helps increase economic activity, but the recovery of the tourism sector in the islands is gradual, even with negative numbers compared to 2019,” reported Andrés Ordóñez, director of the Galápagos Provincial Tourism Chamber.

“The economic reactivation is still very slow and in meetings with the Minister of Tourism we have requested that he set his eyes on Galapagos regarding incentives and financial aid,” Ordóñez said.

The Chamber expects an increase of 10,000 tourists for this month and 12,000 for August, taking into account that it is school vacation time in the Sierra and coincides with summer in the Northern Hemisphere (USA, Canada and Europe).

The sector asks the Government to support the international promotion campaign of the islands and requests access to financing from public banks, which they have not been able to access. They have also officially requested tax reductions.

The province has 317 accommodation sites and 190 tourist boats. Rocío de Malo, owner of the ship El Gran Dafne, indicated that only 40% of the accommodation ships are operating and yet all are required to pay 100% of their annual operating license, which represents thousands of dollars for navigable cruises.

“We have worked this year for four days in June and the first week of July. This has not been considered for and affectation, to avoid payments such as patents or municipal taxes, “said the owner of the boat with capacity for 17 tourists.

The cruise market is almost entirely dependent on foreign tourism. The average of US $ 3,000 per week per person has dropped to US $ 800 on ships, according to de Malo.

The sector does not have any prospects for reserves or contracts for the future either, and shipowners have had to sustain, for more than a year, substantial operating costs of the ships, since by regulations they must pay for insurance and keep crew on board.

The Minister of Tourism, Niels Olsen, indicated that from the first days of management the State Portfolio launched the Breathe Again campaign to attract tourism. In addition, the entry requirements to the islands have been approved.

“In Galapagos, 80% of the economy depends on tourism and that is why it was very important to speed up vaccination, in addition to the fact that the archipelago has always been considered the anchor to attract foreign tourists, who also visit mainland Ecuador,” said Olsen.

Galápagos Protected Area: To extend the reserve or not?

Organic production is promoted in the region with virtual workshops