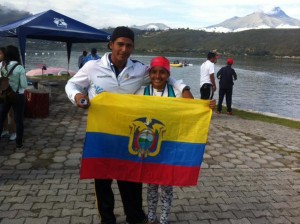 Joselyn Villón obtained the first place in the Kayaking South American champioship that took place in the Yahuarcocha lagoon, in Ibarra, in the C1 modality of the junior category, informed the Ecuadorian Olympic Committee.

In the U-23 Anggie Avegno at the same distance, ranked second with a time of 5’01″65. Brazilian Andrea Santos obtained the first place and the third was for the Ecuadorian Mía Friend.

350 athletes from Brazil, Chile, Uruguay, Colombia, Argentina, Peru, Venezuela and Ecuador (host) are participating in the tournament. Finals will be on Sunday, April 19th.