Guayaquil is dressed in light blue and white to celebrate its 194 years of Independence. 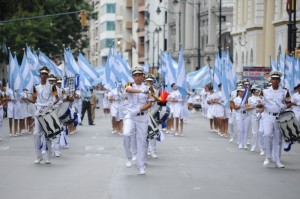 In the morning, local authorities paid a fitting tribute to the city of Guayaquil for its 194 years of independence, placing wreaths at the Column of the Heroes, in the central Parque Centenario.

The Pearl of the Pacific, the national economic engine, is celebrating, and Guayaquil has a whole activities agenda for the enjoyment of citizens.

Some of the alternatives are the XIXth Civic Students Parade “Independent Guayaquil Is My Destiny”, considered one of the largest in the city. This will tour 7km with its six floats and will involve about 3,000 people (marching bands, cheerleaders, folk groups, among others).

Another options are the outdoor concerts and the First Guayaquil Fair 2014 , in the Conventions Center, where over 150 exhibitors take part. Visitors will enjoy artistic performances of all kinds, as well as the typical food with 30 winning “huecas” (tiny typical restaurants) of the gastronomic festival.

Thus, the Guayaquil people, pay tribute to the most populous city in the country, including wreaths, floats, marching bands, cheerleaders, and a lot of commotion.