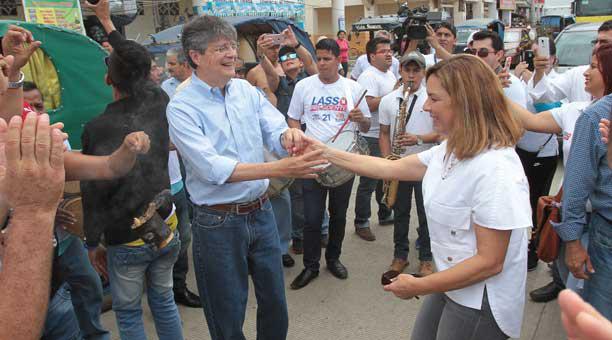 María de Lourdes Alcivar keeps pace with her husband Guillermo Lasso in the rhythm and his political campaign. Lasso is an expert in La Piragua, who dances to the beat of that music among his followers. This is not the classic cumbia of Colombian origin, it is heard in the style of Miñongo and his Congo, from Bahia de Caraquez. And on Saturday, January 28, 2017, this music accompanied him from 11:00, when he landed in a small plane at Los Perales Airport, in San Vicente, Manabí. Lasso says that from an early age he listens to it and likes it.

He is the youngest of 11 siblings and says that there was always music in his house. The leadership of the Creo party included the band during his visit through four Manabi counties. The choir: “Guillermo Cubillos´ Piragua” was transformed into “Guillermo Lasso’s Piragua.” The candidate does not have a boat, as in the original song, but he has a ‘Lasso mobile,’ a van that is lined with propaganda and ‘sails’ through rivers of sympathizers.