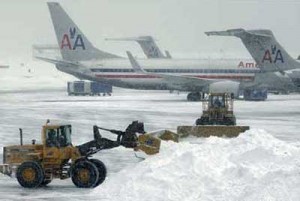 Ferocious winter storm continued to barrel eastward across the United States on Wednesday morning, snarling travel by road, air and rail as it blanketed wide swaths from the Great Plains to New England in deep snow and left a brittle skin of ice over large sections of the Northeast.

As the snowfall slowed and moved out of many areas, federal officials warned people to brace for another blow: bitterly cold temperatures following in its wake. It was not a day to travel. Icy, snow-covered roads were closed in many states. Air travel continued to be an iffy proposition in many parts of the country: by noon some 5,634 flights — or around 18 percent of the nation’s flights — had already been canceled, according toFlightAware.com, a Web site that tracks flights. Amtrak canceled many trains out of Chicago, and there were residual delays on its Northeast corridor between New York and Philadelphia, which was shut down during the morning rush hour.

Chicago was one of the worst hit spots, with hundreds of drivers and passengers reported trapped on Lake Shore Drive overnight. The National Weather Service, in a 10:26 a.m. warning about what it called a “historic killer blizzard,” was blunt about the risks travelers there faced. “Local officials continue to plead with people to stay home and not to travel,” it warned, “as doing so will put your life at risk.”

By midmorning, some 20,2 inches of snow had fallen in Chicago, making it the city’s third-biggest snowstorm even as flakes continued to fall, according to the National Weather Service.

The storm made for a slippery morning commute in the New York area, where ice caused the Long Island Rail Road to operate on a weekend schedule. On Metro North, riders on the New Haven Line were warned to expect crowded trains and delays because of what it called “severe and ongoing weather-related equipment shortages.” In New Jersey, more than 25,000 homes and businesses lost power. The state’s largest utility, Public Service Electric and Gas, reported Wednesday morning that about 20,000 of its customers had lost power because of icing on equipment and trees.

Flying was tough. About 1,500 flights were canceled in New York’s three airports, said Daniel Baker, the chief executive of FlightAware.com. And American Airlines was hit particularly hard by the storm, since it closed one hub in Dallas-Ft. Worth on Tuesday, and then effectively closed another, at Chicago’s O’Hare International Airport, overnight and into Wednesday morning.

All told, 13,608 flights have been canceled so far this week, and Mr. Baker said that the number could rise.

The main problem in Chicago was not just a lot of snow, but fierce, swirling winds (some with gusts of 60 and 70 miles an hour) that howled ominously all night, sending the snow into giant drifts in some places and making it almost impossible to see anything in front of you. In wide open areas, people struggled to keep from being swept away by wind, and some were seen clinging to light poles downtown. And in some places in the city, the snow was still falling.
Schools closed for the first time in a dozen years. State highway officials had a simple message: all roads were bad. But some were worse, and Lake Shore Drive, a central thoroughfare along Lake Michigan in Chicago, was closed Tuesday evening; as snow piled up, at least one city bus became stuck across three lanes, and the high winds sent waves flying off the lake.

More than 70,000 residents in Chicago and the suburbs were without power by Wednesday morning, thanks to the high winds and heavy snow.