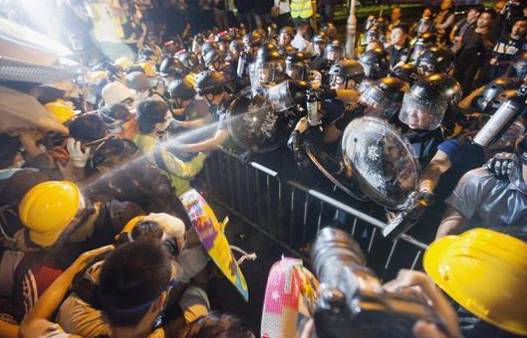 The pro-democracy protests in Hong Kong were reactivated after a night of clashes in which fifty people were arrested and forty wounded.

The protesters, wearing helmets, tried to force the police cordon deployed around the seat of government of Leung Chun-ying, during a meeting in the Admiralty area, main stage of demonstrations.

The organizers had made a calling to gather on Sunday, after the police evacuated last week, in the district of Mongkok, one of the three zones occupied by the pro-democracy protesters in Hong Kong.

For over twelve hours hundreds of policemen and protesters got involved in fierce clashes where authorities used batons and pepper spray to disperse the demonstrators.

While today, at least 40 people were arrested and 40 were injured this Monday in Hong Kong at the return of protests and clashes between pro-democracy protesters and policemen, officials said.

The officials condemned what they called “illegal acts of violent radicals.”