The Regional Health House of Ambato, 4 years ago, was budgeted at $ 38.9 million, but now it will cost more than $ 73 million. The redesigns raised items of civil engineering and engineering such as: electrical system, electronic, medical gases, burn area and elevators, etc. By December 2014, the delivery of the Teaching Regional Hospital of Ambato was scheduled, but it has been 4 years and its repowering and construction has not yet finished. It barely has an advance of 57% and the investment increased by more than 89%. The job, in charge of the Works Contracting Service (Secob) and the Army Corps of Engineers, began on July 2, 2013, with a budget of $ 38,997,100.

After the first work, technical aspects were identified that made it impossible to repower that health home, which changed the main purpose of the contract and delays began. The Minister of Health, Verónica Espinosa, told the public media that a redesign of all the proposed work had to be done, and the construction of another tower was proposed, which practically implies a new hospital.

Milagros Pesántez,  manager of Hospiplan, company responsible for overseeing the work, said that the deficiencies of the studies and the conditions of the building forced the demolition of the old hospital, because there were faults in its structure with the risk of collapsing.

On May 31, 2013, through a public contest, Hospiplan won from among 7 companies the inspection contract, valued at $ 1’489.323. The job was to ensure that the construction of the hospital is developed within the deadline and with the appropriate technical specifications: “We do not have competition over the design contract, we start with a definitive project,” he argued.

The newspaper el Telegrafo  shows a report in which the current total cost of the work reaches $ 73,545,774. This report highlights a series of problems in the construction of the hospital, due to the redesigns implemented by SECOB and the Ministry of Public Health.

For example, in principle the operating rooms had to be on the ground floor, but in February 2016 the contracting entity requested the change to the third floor, without taking into account the adjustments for the polluting products. This created the ‘crossed circulations’, that is, the entry of sterilized material is crossed with the contaminated material.

The report highlights that the redesigns of the project directly affected the increase of items in terms of civil works and other engineering such as electrical, electronic, medical gases, increase in the area of burned and elevators, among others.

At this point, according to Espinosa, the final amount of the investment would even reach $ 97,000,000, which will include equipment and infrastructure. “There may have been increases inherent to the change of designs …”, he justified.

Returning to the subject of the report, it also refers to the current contracts, which do not contemplate the provision of special doors for the operation of isolated areas and sterile areas.

On the other hand, there is no approval of the specifications for the clean water and hemodialysis treatment plant, which would be included in the budget, but until now this matter has not been processed.

Two extensions of term, of 1 year and a half and of 6 months, due to redesigns, have caused that the delivery time to be extended.

Three suspensions of contractual term occurred in these 4 years, one of them after the visit of former President Rafael Correa to this health house, who had requested that the rooms of the hospitalization area not to have 2 beds as established by the initial project, but 5. The new hospital will have a capacity of 300 beds for that area.

The last suspension is in valid since April 6 of this year and the contractual term would be about to expire.

Around 276 workers of the Army Corps of Engineers work in the construction of the hospital. 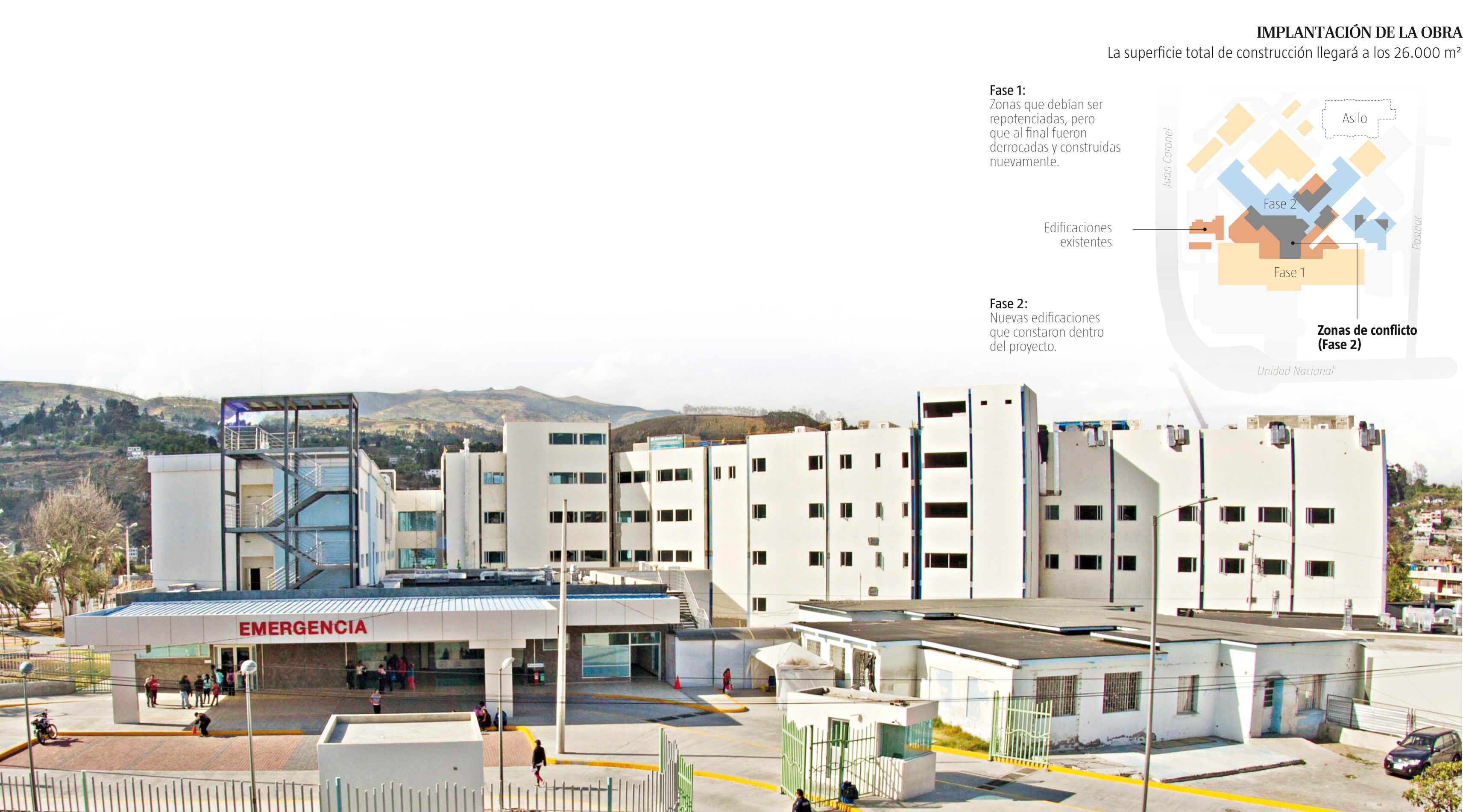 The Minister of Health assured that the works are carried out normally: “The hospital, at the moment is in the building site, we have permanent staff, and we do continuous supervision”.

On June 9, the contract with the inspection company was terminated by mutual agreement. “The withdrawal of Hospiplan is due to the interests of the company because the initial contract established 18 months of construction and 4 years have already elapsed,” Pesántez explained.

The newspaper requested an interview with authorities or spokesmen of the Engineers of the Army to talk about the issue, but it was excused for reasons of agenda. It was also asked to speak with the Secob, but until the close of this edition the entity did not issue a response. (I)