Human rights in Ecuador are under suspicion 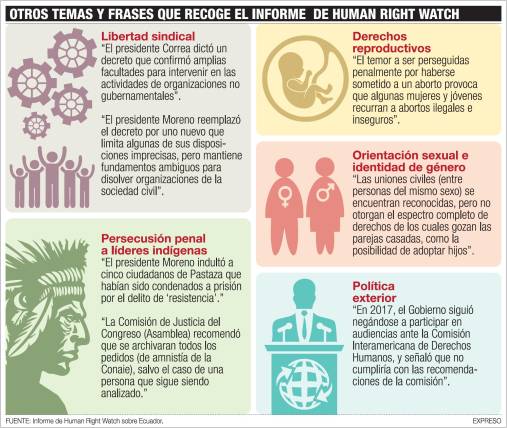 The shadow of former President Rafael Correa still smudges the Ecuadorian business card on human rights. The management of the now opposition to President Lenin Moreno, seven months after delivering the Presidency, full of negative adjectives the annual report of the organization Human Right Watch (Observatory of Human Rights) on Ecuador on issues such as freedom of expression, freedom of association, judicial independence, among others.

On the first, the elimination of the hostile discourse against the media, the change of the heads of the public media stands out, but it is not enough. “An Organic Communication Law of 2013 continues to apply, granting the Government broad powers to limit freedom of expression,” the document reads.

Francisco Rocha, executive director of the Ecuadorian Association of Newspaper Publishers, applauds criticism of a rule that believes “you have to dismantle.” Not so the praise for the reduction of adverse speech to the press. “Yes, with this Saturday there are already 30 who do not insult us, but it is not to be grateful, it is our right”.

Moreno himself has said on several occasions that he does not intend to repeal the law, but to reform it. To date, of the six draft changes to said regulations that are in the Assembly, none is of the Executive.

The leak of emails from conversations between Correa, his legal secretary and the president of the Council of the Judiciary, Gustavo Jalkh, about cases in the judicial system is also in the report, as an example of the lack of independence in justice.

María Dolores Miño, executive director of the Observatory of Rights and Justice and professor at the University of the Americas, believes that the situation of justice with the new Government has not changed in these months, to the point that it has not deserved a positive comment from the organization in your report. “That says a lot about the existence of a real change that is not evident at the moment. It is a wake-up call to the Government, “she says.

The organization did not leave aside other cases such as sexual abuse of minors in public education institutes. More than 880 cases between 2014 and 2017, the report includes, and “impunity in these cases continues to be the rule”. Also the filtration of videos about mistreatment of the inmates of the Turi prison by the police. And as a nod ends highlighting Moreno’s concern about the “political prisoners” in Venezuela as a gesture of distancing himself from his predecessor.

It is a wake-up call to the Government. It is an opportunity to take these points as orientation mechanisms to reform human rights practices.

Francisco Rocha, Executive Director of the Association of Newspaper Publishers.

We agree that it is essential to dismantle the Communication Law. Generate a structure to defend the rights to communication and not a sanctioning law, but a promoter of communication.

Billy Navarrete, executive secretary of the Committee for the Defense of Human Rights.

The report is an advocacy tool. As an organization, it helps us to know what is being recognized in the country and internationally. It should allow opening studies to overcome these deficiencies. (I)