Increased Radiation levels in the Sea are Discovered 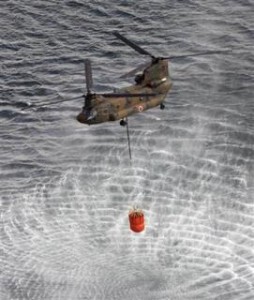 The radiation levels in the sea near the Fukushima nuclear plant have increased and they have surpassed the safety limits by 3,355 times. This is the highest radioactive concentration according to the Nuclear Security Agency of Japan. The radiation in the seawater has escalated, however danger for the sea life is minimum.

Tepco operators of the plant plan to spray half of the synthetic resin in some sectors to avoid the spread of radioactive dust. The pollution of the ocean is distraught matter for a nation were fish is a daily part of their diets. Recently Tepco announced that it will take some time to stabilize the overheated reactors and also informed that 4 of the 6 reactors will be dismantled.

The Chief Secretary of the Japanese cabinet, Yukio Edano, stated that they are not in a position were they can assure when the situation will be under control. Meanwhile the International Atomic Energy Agency (IAEA) informed that the evacuation of the civilians that reside near the Fukushima Daiichi plant should be extended to the town of Iitate. The United States department of Energy gave to Japan robots that can resist the radiation and thus gather information on the status of reactors that have highly radioactive concentrations.

Prices of Technology Items Could Increase Due to Japan’s Disaster

Brazil Will Manufacture Automovile Components Made of Fruit Fiber