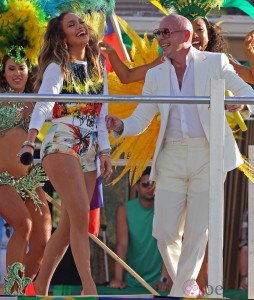 The 25-minute ceremony, will include the participation of 600 dancers, acrobats and gymnasts

A few days before the World Cup Brazil 2014 starts, FIFA, the event organizer, said that Puerto Rican singer Jennifer Lopez will not participate in the opening ceremony at the new Arena Corinthians stadium in the city of Sao Paulo, as originally planned.

The official song of this universal tournament is “We Are One”, where Lopez and Pitbull shares credits with the Brazilian singer Claudia Leitte. “Due to production problems, Jennifer Lopez, one of the official artists of the song ‘We Are One’, will not participate in the opening ceremony of the FIFA World Cup,” said an official statement of the organization.

The ceremony will last approximately 25 minutes, after which the first match of the tournament: Brazil versus Croatia, will take place.