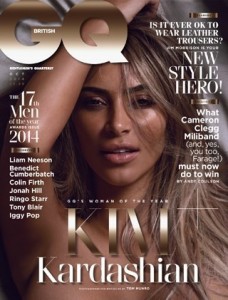 During the delivery of the GQ awards in London last September 3, Kim Kardashian, received the award for ‘Woman of the Year 2014’. In her Twitter account, she thanked GQ magazine for the award and said she was honored by the title.

The delivery of the awards was performed at the Covent Garden in London. Kardashian was the only woman awarded and during her speech she thanked her husband, rapper Kanye West, saying that every day he makes her feel like the woman of the year.

As the winner, Kardashian appears on the cover of October men’s magazine. In her Instagram account the reality shows actress published the opening photograph of the next publication.

She also released a picture of the photo shoot by photographer Tom Munro in which she appears lying, looking back at the camera and completely naked.