La Clementina, in constant renegotiation with the CFN and paying only interests

Despite preferential conditions and payment facilities granted, La Clementina, one of the largest banana plantations in the country, has not generated enough income to pay the capital of a millionaire public loan granted by the National Finance Corporation (CFN). 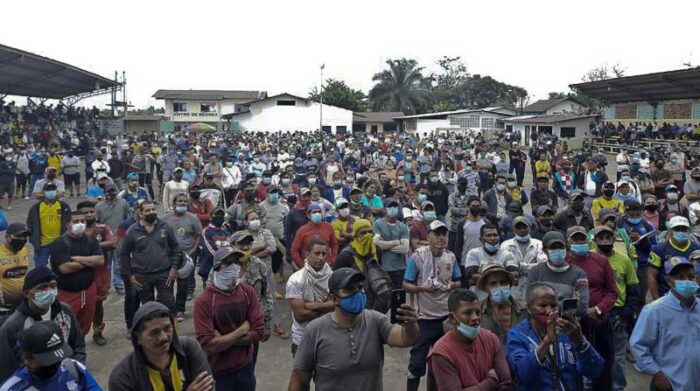 Some of the La Clementina workers ask the administrators for answers and payment of back wages.

Under a program of the then government of Rafael Correa called ‘ Buen Vivir ‘, the property of the hacienda, seized by the State from the Noboa Group for a tax debt, was acquired in December 2013 by 1 800 workers grouped in the Production Cooperative and La Clementina Marketing (Cooproclem).

The purchase was possible thanks to a loan of USD 78.9 million that covered 100% of the value of the farm and that was delivered by the CFN in February 2014. But the idea of ​​the Government of that time to generate a prosperous business in the hands of the workers it has not materialized.

Almost eight years later, the hacienda registers a drop in income and in some years losses, millionaire debts with Social Security and has even had to dismember to cover part of the capital of the CFN loan.

From the beginning, the loan was granted under special conditions. Initially, it was going to have a rate of 8%, but in the end, it dropped to 5%; and two years of grace were granted, although at first only 12 months were discussed.

Despite this, Cooproclem has sought facilities to meet the debt on two occasions. The first order was approved by the CFN in 2017, the year the farm closed with USD 3.5 million in losses.

Cooproclem dismembered 2,145 of the 12,085 hectares of the property, to pay USD 5.5 million to the capital and request a novation. On that occasion, two more years of grace were granted to pay the principal.

The sale of a part of the farm, according to Carlos Andrade, Cooproclem’s legal representative, was authorized by the CFN, as it is unproductive land, not banana.

Andrade also argues that they have not been able to increase productivity due to the obsolete irrigation system and having plantations that are more than 50 years old. And he said that at the beginning they had problems managing the asset, so in 2019 they hired the firm Koval Management to solve this issue.

The new administrator requested again that year payment facilities to the CFN, which extended the term of the loan to 19 years and seven months and four years of grace for the capital. He even had 365 special days of grace (between October 3, 2018, and September 20, 2019) where he paid nothing, no interest or principal. The hacienda will only begin to pay the capital in 2023; that is, for 8 years (almost a decade) you will only pay interest.

Julio César Cueva, Koval’s lawyer, explained that the restructuring was requested after the intense winter season that that year affected 800 hectares.

La Clementina also faces problems with workers. On August 10, a group of employees protested the delay in the payment of wages and obligations to Social Security.

Andrade admitted the non-payment but did not specify the figure. “If productivity drops, wages drop and there are arrears.

This newspaper spoke with two workers who participated in the protest. They show a document from the IESS that indicates that the farm maintains 1.5 million in arrears. They indicated that, in addition, the promises of the Russian administrator have not been fulfilled.

For example, the implementation of a housing plan, creation of social club and earnings for employees.

President Guillermo Lasso questioned that the CFN has granted “huge loans to a small club of debtors.” Without giving names, he said that a small farmer does not access credit, “but a sprightly man has access to USD 75 million and does not pay it, but only interest,” he commented, noting that he will collect those credits.

Cueva says that this is not the case in La Clementina, where “the government of the day tried to allow workers who had been working for 20 or 25 years to be the owners of the hacienda.”

He insisted that the loan payment is up to date and that USD 33.4 million has already been paid to CFN and Banco del Pacífico . Of those, 5.5 million are for the capital contribution of 2017 to the CFN and the rest to interest.

But he points out that the debt acquired is not sustainable, since it amounts to USD 24,792 of debt per hectare, when the average for the banana business is USD 15,000 per hectare.

Added to this are the problems of the pandemic (such as worker absenteeism in 2020) or the ash from the Sangay, which damaged plantations. “The credit for the CFN is one of the largest risk operations, concentrated in a single creditor,” he explains.

That is why they are looking for a new payment solution. The plan, Cueva explained, is to sell another 4,500 unproductive ha valued at USD 19.8 million. Half will be to pay part of the loan capital and the rest to invest and increase banana production until 2039.

The CFN declined to comment on the loan “due to bank secrecy.”

Meanwhile, a worker in the La Clementina leaf removal area says with regret: “They told us that we were going to be the owners and it has never been fulfilled because until today it is not known who the owner is.”

Man lives in uncertainty. “We go to bed to sleep, and we do not know if we will work the next day, because if you complain they will fire you.”

According to him, some of his colleagues who were separated at the end of 2020 still appear as debtors of the loan with the CFN.

“They are without work and with that debt. We have asked for information, and no one gives an account of what happens after leaving La Clementina”, he indicated.

Shortages and unprecedented escalation of costs, to more than 40%, impact the national cardboard sector

In Ecuador, 38.48% of companies invest in environmental protection.