President-elect Guillermo Lasso , called for the support of the head of state of Colombia , Ivan Duque , for the “immediate income” of Ecuador to the Alliance of the Pacific , a mechanism for integrating trade of which are also part of Chile, Mexico and Peru. 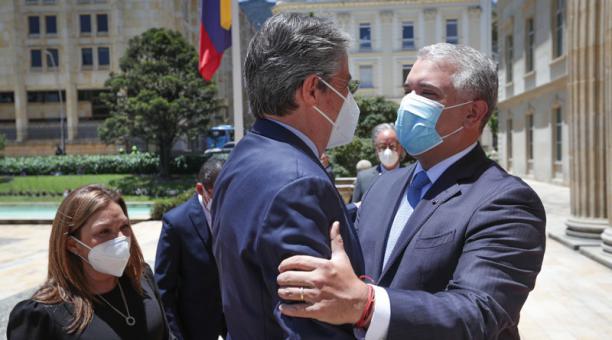 The president-elect of Ecuador, Guillermo Lasso, and the first president of Colombia, Iván Duque, met on Tuesday, April 20, 2021 in Bogotá.

Lasso and Duque offered a joint statement this Tuesday, April 20, 2021, at the conclusion of a meeting at the Casa de Nariño , headquarters of the Executive of the neighboring country, in Bogotá .

Duque replied that he “deeply values” the visitfrom Lasso to Bogotá , which becomes the first international tour of the president-elect, just nine days after the ballot that made him the successor of Lenín Moreno .

“Today we address issues of great importance for our countries. In the first place, I believe that we also ratify the commitment to see Ecuador as a full member of the Pacific Alliance, ”said the Colombian President.

“In my capacity as president pro tempore of the Pacific Alliance,” said Duque, “I reiterate not only the interest, but all the help from Colombia so that during this pro tempore Presidency we can guarantee Ecuador’s access to this important alliance.”

Duque referred to Lasso as “a great friend” and congratulated him for the “valuable victory” in the elections of April 11 , as well as for “his convictions that he has always held in his defense of democracy throughout the hemisphere.” .

During this meeting , which was given in a reserved manner and included a lunch for the delegation, they also addressed issues of cooperation in matters of security, as well as democracy and freedom. Lasso is expected to return to Ecuador this Tuesday afternoon.