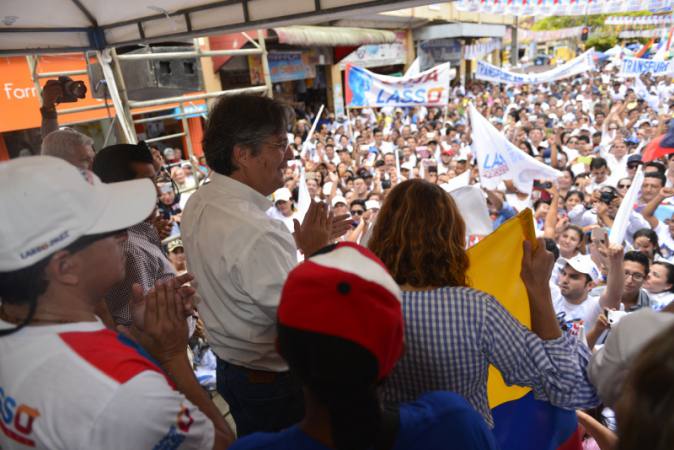 The opposition candidate, Guillermo Lasso, has said that the government´s party candidate Lenin Moreno “fled his own debate,” after the state Network of Teachers for the Revolution canceled, Saturday afternoon, the only encounter Moreno had agreed to attend.
Previously, Moreno refused to attend the debate organized by the Chamber of Commerce of Guayaquil, and another proposed by the international news network CNN.

Through a statement released by his press team, Lasso said he accepted the invitation without putting any conditions, “even knowing that this organization is a façade of the Alianza Pais party.” He referred to the Network of Teachers, that after the first round staged a march against him, in Quito, which culminated throwing cans of tuna at the CREO party´s headquarters. Lasso says he accepted because it is his “democratic duty, as a presidential hopeful, to contrast proposals before citizens in every possible forum.

Even more against the permanent denial of candidate Lenin Moreno to the multiple invitations, he has received to debate.” The opposition candidate says that “the organizers of the event in total disregard for the citizens have decided to cancel the invitation,” which is “unacceptable, as well as painful” for him.