Manabí has the highest percentage of beneficiaries of the welfare bonus 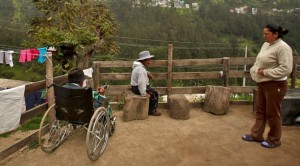 The province of Manabí has a 26.8%, higher percentage of beneficiaries of the Human Development Bonus (BDH by its Spanish acronym), a subsidy of $50 dollars that the Ecuador Government provided to help households in poverty.

Guayas with 16.2% and Orellana with 12.5%, are as following provinces, according to the Ministry of Economic and Social Inclusion (MIES by its Spanish acronym).

Since January 2013, the Government seeks to reduce the number of Ecuadorians who receive this benefit. To this end, a depuration process has been initiated in the database.

From that date until this month, 390,305 people stopped receiving the bonus, this is an average of 716 people each day. The biggest cut was in April 2013 when nearly 130,000 Ecuadorians ceased to be beneficiaries only in one month. The main reason was they did not meet the Ministerial Agreement 197 of MIES, which established a set of conditions to receive this payment.

In April of this year, 106,657 people were left out of the benefit. The main causes of the output is that these beneficiaries have overcome extreme poverty because they got a formal job, some even in the public sector; they now have access to basic services like education and health.

This reduction means a tax savings of $ 19.5 million dollars per month; that is, about $ 234 million a year.