March led by indigenous women ended with struggles in Quito 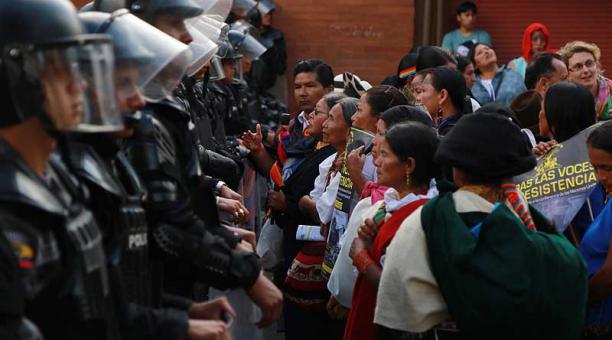 The march that took place in Quito, in parallel to the Habitat III conference, finished in the 12 de Octubre Avenue, the afternoon of Monday, October 17. At the site, members of social groups gave a press conference revealing their stance in cases related to evictions and rights of indigenous peoples. During the event, there were struggles with members of the National Police. At approximately 17:30 protesters began to arrive, after dispersing into Alfredo Perez Guerrero Avenue, where they were interrupted before starting the march off. Once they were in El Giron, the events planned in the other agenda began.

The first thing they did was to present the mural called custodians of Our Habitat, which is painted on the Giron building. The work, done by the Swiss artist, Mona Caron, pays tribute to nine indigenous women leaders. Some of the women portrayed, like Alicia Cahuiya and Josefina Lema, were present at the event and emphasized their concern about the exploitation of the Yasuni and the situation of their peoples and communities. They called on people to “save” their territories and the biodiversity that exists in them. In the event, the results of the meeting of the International Tribunal on Evictions, which is made up of members of civil society organizations from Argentina, Ecuador, Italy, Mexico and Zimbabwe, who tried seven cases worldwide, was also presented.

The CNE calls for the registration of candidates