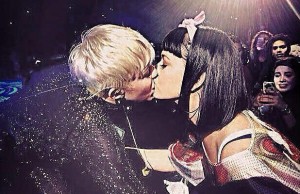 Miley Cyrus surprised with a kiss the singer Katy Perry, during a concert which featured the night of Saturday at the Staples Center de Los Ángeles. Perry was not part of the show, was only as a spectator in the front row looking at Cyrus, who at the time of the singular event interpreted “Adore You” theme.

The singers smiled during this event. Miley said: “I just kissed a girl and liked it a lot,” in reference to a song of Perry, who post up to Twitter a photo of the moment with the message “And then, I adore Miley Cyrus”.

The right-wing wins in Quito, Guayaquil and Cuenca