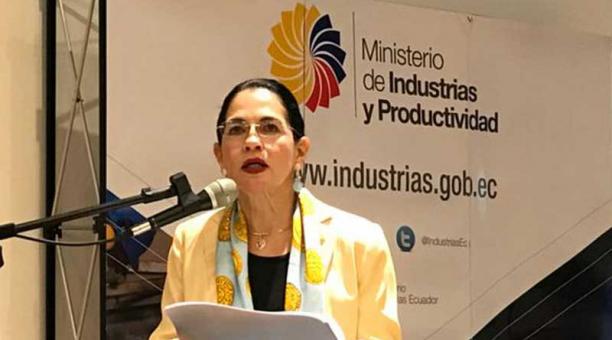 The Ministry of Industries and Productivity is not in favor of applying restrictive measures to trade. “It’s not our model. I believe that there must be a commitment by businessmen and the population to restrict imports of sumptuary consumer goods of its own accord. It is not a restriction that the Government must make, “said this Thursday, February 22, 2018, the holder of this State Portfolio, Eva García, within the framework of the accountability of her administration.

She recalled that much of the national production depends on imported raw materials, capital goods and intermediate inputs. The development model in which Industries works, Garcia explained, consists in the selective substitution of imports by local production. “There is a great conceptual change, even in the way in which we want to strengthen and sustain dollarization.” The manager of the Central Bank, Veronica Artola, said last Sunday to this newspaper that one of the greatest risks of the economy lies in the imbalance of the external sector, since more currencies are coming out of those that enter.

In order to face this scenario, she said that the Government is working on an economic and fiscal stabilization plan and hinted that measures are being evaluated for foreign trade. “We are looking for that the measures do not mean to affect necessary imports for the productive processes “.

And added that the BCE has always said that it is a participant that the purchase of consumer goods that are not needed (cars or cell phones) can be restricted a bit to reduce the outflow of foreign currency. The creation of trade barriers is one of the 10 “irritating” issues that Ecuador must resolve before going to a trade agreement with the United States, said Ecuadorian ambassador Todd Chapman.

In the list, in addition to the restrictions on the exchange of goods and services, are the rate of customs control, patents, intellectual property to software, music and videos, among others.

On the issues that concern the portfolio of Industries and Productivity, such as the control of piracy, García pointed out that the respective undersecretaries apply the necessary controls on hangers, quality and other areas, both for the national and foreign product.

For the export sector, it is essential that these sensitive points be solved for trade, since trade agreements are required to guarantee an increase in sales. Daniel Legarda, president of the Ecuadorian Federation of Exporters, believes that not only the elimination of the customs fee is necessary, but also the reactivation of the Bilateral Investment Treaties (BIT).

The Minister of Foreign Trade, Pablo Campana, and the Foreign Ministry announced that they will hand over the draft of a new BIT next week to the 16 countries that do not have this instrument.

Beyond the number of irritating topics, Legarda believes that Ecuador should give clear signals that it is willing to find a solution. Since not only possible negotiations with countries are affected, but also local production. The president of Expoflores, Alejandro Martínez, considers that most trade restriction measures have a fiscal collection nature and their effect is the lack of growth of the industry.

That is why he sees Ambassador Chapman’s statements as a good warning. He says that they reflect the actions that the country must take not only with the United States. but for commerce in general. Martinez believes that another important issue to address is the intellectual property. The lack of attention to this point generates distrust among business partners. Eduardo Ledesma, president of the Association of Banana Exporters of Ecuador (Aebe), recalls that the country also had to resolve irritating issues on the way to finalize the agreement with the European Union (EU). Even, he points out, two ministers had to pass through the Foreign Trade office.

Therefore, he trusts that the current outstanding issues will be resolved. He believes that the work of Pablo Campana and Humberto Jiménez from the Ministry of Foreign Trade and Investment is positive. (I)

Todd Chapman: ’10 issues must be resolved before going to the commercial agreement ‘