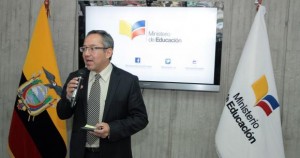 The president of the National Union of Educators (UNE), Rosana Palacios, reported that the December 2015 salaries of hundreds of teachers continued until yesterday unpaid.

But Education Minister Augusto Espinosa, through his Twitter account, explained that “a problem with the system delayed some payments.”

He also said that the Ministry of Finance had confirmed that between 16:30 yesterday and 08:30 today the outstanding values would be paid and offered “apologies for any inconvenience” caused by the delay.

Rosana Palacios explained that throughout the morning she was visited by teachers of Pichincha and received several calls from other provinces asking her to undertake negotiations so that the Ministry of Education fulfills its obligations.

According to the leader, although the Government had pledged to pay both the Chistmas bonuses and public sector wages until December 31, there were provinces where that did not happen.
Source: http://www.eluniverso.com/noticias/2016/01/05/nota/5326759/se-ofrecen-disculpas-maestros-impagos