BREAKING NEWS
Ecuadorian Dolores Cacuango, in the Google doodle for the anniversary of her birth
Prosecutor investigates Leonidas Iza for trying to demolish the statue of Isabel La Católica
Ecuador and Spain work on actions to recover tourism
Julio Muñoz: “Thanks to the Ecuador Digital policy, the country was prepared to face the health emergency”
Looking at markets and competitors, the MAG today sets the price of a box of bananas for 2021
Electoral body will implement smart video surveillance for the 2021 elections
Decentralized Operational Center is already operating in Guayaquil
Abdala Bucaram’s trial was postponed to November 9
Ecuador seeks a space in the world market for the vaccine for covid-19
CNE Ecuador: “We cannot allow candidates with a crown to exist” 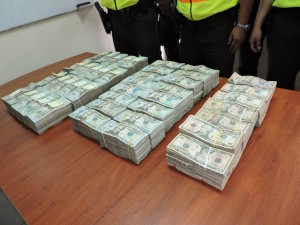 A highway control operation carried out by agents of the Community Police of Sacan, in the Jipijapa- Montecristi road found the money hidden in cardboard boxes, under seats and even in a gift bag.

The couple who was in the car, offered $ 20,000 to the agents, then the 10% of the total and, finally, all the money, in order to avoid being arrested.

The agents refused the bribe and arrested the couple who, until yesterday, did not justify the origin of the bills.

Iron Maiden singer gave a lecture at the Campus Party