Payments were made between April and August. For next year, the Ministry of Labor requires $ 633 million to cover the retirement incentives of 12,129 approved cases. The Ministry of Labor has paid more than $ 366 million for retirement benefits to 7,177 former public officials. The payments were made between April and December. 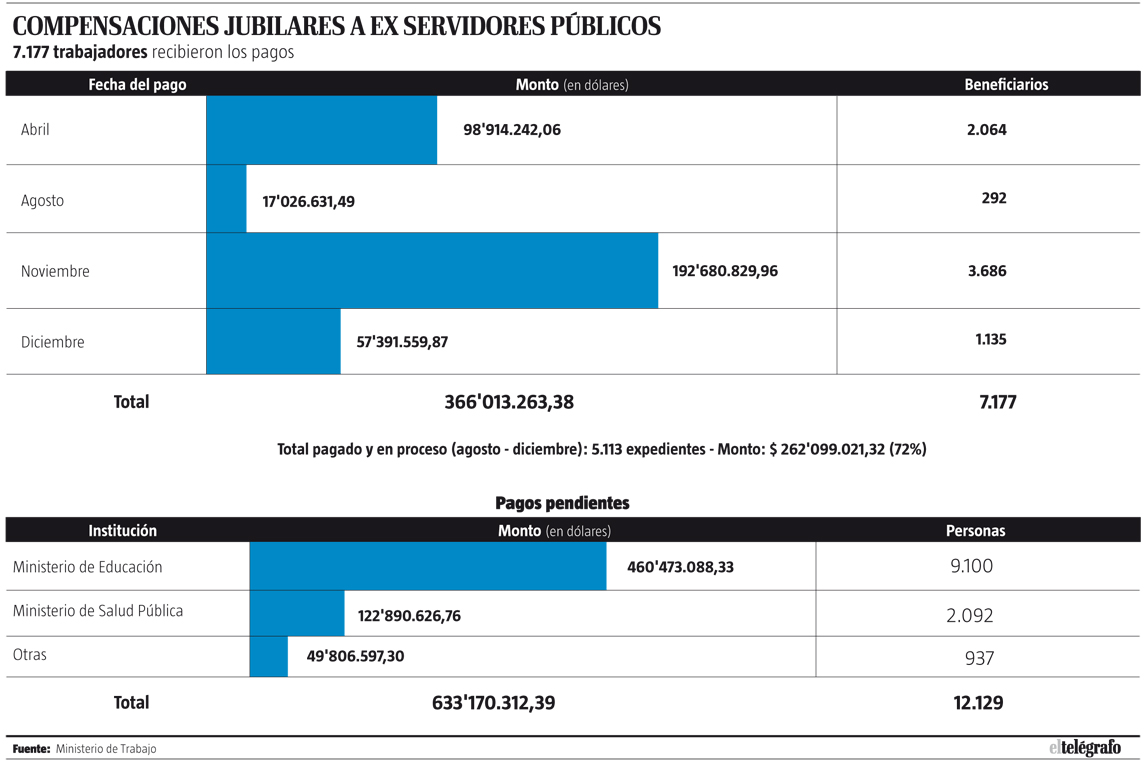 In May, the Government’s debt to retirees amounted to $ 1,123 million for approximately 22,049 cases. Andrés Madero, Deputy Minister of Labor, yesterday exposed to the Economic Regime Commission that between August and December the majority of obligations were fulfilled, crediting $ 267 million corresponding to 5,113 records.

During this period, the majority of transfers were allocated to the Ministries of Education and Health with $ 209 million benefiting 3,978 retirees. Madero reported that the Ministry has validated 12,129 cases for which it requires $ 633 million. The approved corresponds to 81% of the documentation entered by public institutions. In the General State Budget of 2018, $ 244 million are allocated to attend the retirement benefits, leaving a difference of around $ 389 million to reach the amount approved by the ministry.

The vice minister mentioned that on Tuesday there was a meeting with the Ministry of Finance, in which it was agreed that at the beginning of next year the Work Portfolio will receive $ 200 million more than budgeted. “We would have an approximate of $ 450 million initially,” Madero said, adding that the expectation is to obtain the $ 633 million they need during the first semester.

Of the operations carried out in the last five months, $ 21 million was used to attend to 442 pending cases between 2011 and 2015. The data presented by Madero calmed the spirits of the assembly members a little, who complained about the lack of agility in the procedures and attention to the retirees, as well as the absence of the head of Labor, Raúl Ledesma, to render accounts. Cristóbal Lloret (AP) criticized that in the session of November 13 another high official of the Ministry assured that within the two weeks subsequent to that date the cancellation of the incentives would be effective. “And that has not happened,” he said.

Madero responded that in November $ 192 million was paid to 3,686 people, clarifying that the task of this state portfolio is to check that the established requirements are met. The Commission concluded by integrating a delegation of five assembly members to follow up on the issue by meeting with the Ministers of Finance and Labor. (I)

“The name of electronic money was wrong”