Narcos are in distress to border towns of Esmeraldas 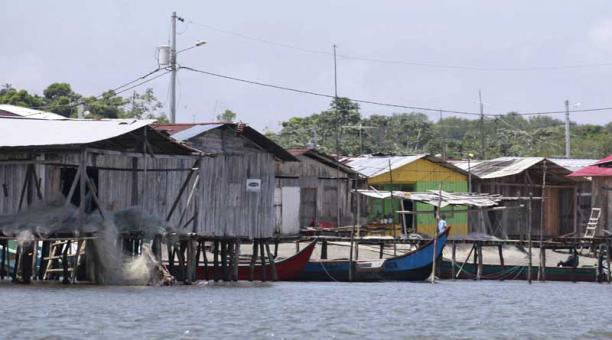 Palma Real was celebrating. It was October of 2017 and this border town of San Lorenzo lived its patron saint festivities. There was music and among the people there were 25 people who were guarding a man. They drank beer, danced and ate shell ceviche. All dressed as peasants, but the villagers knew that the leader was a capo, who manages drug trafficking networks. They usually see him at annual parties. People say that he is not from there, but that they arrive by boat from Candelilla de la Mar, the Colombian town, near Ecuador.

From that place to Palma Real, the boats take 15 minutes. They only have to cross an arm of the sea that separates the two nations. Alias ‘Guacho’, main suspect of the car bomb placed in the police station of San Lorenzo, has also arrived at those parties. He has done so escorted by his closest men. With Washington Prado, who is known by the Colombian police as the ‘Ecuadorian Pablo Escobar’, the same thing happened before he was imprisoned and extradited to the United States. EL COMERCIO entered Palma Real on February 26.

The heat was intense; exceeded 35 degrees. People hid from the sun under the view of the dock that measures about 25 meters. There arrive the boats that come from San Lorenzo. The trip takes about 50 minutes. Most houses are made of wood and are built on the edge of the sea. The center of the town is in the background. There, the parish council, a church, the soccer field, a medical center and the UPC, which operates with 10 uniformed people, are erected.

Until before the San Lorenzo terrorist attack, Palma Real was guarded by five agents. But after the emergency, five elite GIR commandos were assigned to reinforce the security. Now, they are also investigating the movements of drug trafficking organizations, as it is known that they use stretches of beaches and mangroves in the area to hide the shipments they send to Central America and the United States.

Police intelligence confirms this fact and reveals that border towns such as Palma Real are key to criminal networks. “There they have people who do counterintelligence and give them information about police movements.” “They pay them a million pesos (USD 350) to let them know who is arriving or if someone denounces them.

Even they should already know that you were here, “says a man who asks that neither his face nor his name be published. Another resident says that they are also paid to help hide drug shipments. “They make deep holes in the beaches and then cover them with branches.” But Palma Real is not the only town that knows about the movements of these mafias. In that area there are at least seven localities that watch daily how the illegal drug charges go through the Pacific. The Cauchal is one of those points. To get to that place, where 400 people live, you must take another boat and cross a strong current of water that forms at the junction of the sea arm with the ocean. In this way you can see kilometers of deserted beaches. In 2017, in those places they found half a ton of hidden drug. “Those beaches are dead, nobody walks around,” says one of the boatmen who travels that area.

In August, the Navy discovered in El Cauchal a semisubmersible hidden in the mangrove. “I think he was ready to carry a cargo,” says another resident. The day that this newspaper entered that area, the Navy said it had found 1,000 coca plants in the sector. The illegal crop was hidden in an area of abundant vegetation and difficult to access.

The agents know that the mafias try to cultivate there, because the town is in front of Tumaco, the Colombian municipality with the most coca crops. The Colombian Police estimates that there are about 24,000 hectares of illegal crops in this sector. Villagers fear the presence of these mafias and ask for more security. In that small town there are no police or military. “We take care of ourselves. If someone comes to attack us, we have to defend ourselves with our means, “says a man while playing ladies at the seashore.

The majority is engaged in fishing. Others grow chocolate, guanabana or raise cattle. During the afternoons, the town meets on the beach. Children play football on a dirt court and their parents weave nets for fishing by the sea. In the evenings they prefer not to leave, because they know that the narcos’ boats begin to leave with the charges.

In the early morning they often hear the engine of these clandestine boats. Rodrigo was born in El Cauchal, but he has also lived in Limones and Pampanal. There he has seen how the narcos capture the fishermen, because they offer them money in exchange for bringing the narcotics to the US. But they also hire them to supply them with fuel and to keep money and drug stores in their farms.

The suspects arrive to the villagers and offer them money to keep alkaloid packets in their homes or warehouses. Last June, the San Lorenzo Police seized 47 kilos of cocaine. The agents said that the alkaloid was hidden in a small wooden house inside a farm. The owners of the land were criminally prosecuted for illicit stockpiling. The researchers tried to establish links with the posters. (I)

The allegations of corruption begin to point to Correa