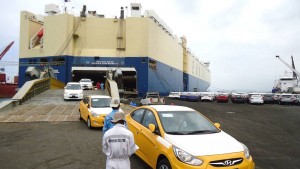 32.920 vehicles between imported and assembled in the country, have been sold in the first four months of the year, i.e., 39.4% of the permitted quota for this year for the import of finished cars and parts (CKD) to assemble, reaching 83.438 units. According to figures from the Association of Automotive Companies of Ecuador (Aeade) and the Ecuadorian Automotive Association (AEA).

Manuel Murtinho, Manager of SAA, is concerned that sales of vehicles imported have declined 10.73% in comparison with the same period in the 2014. Believes that the reduction of about 54% of import quotas for imported vehicles that went from 49.132, in 2014, to 25.617 this year. (I)