Nicaraguan Diplomat Found Dead in The US 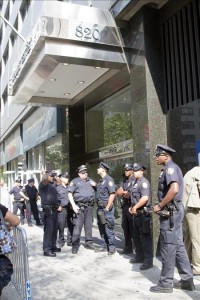 Cesar Mercado, Nicaraguan Diplomat in the US was found dead on thursday at his Bronx apartment. The police believes the Diplomat may have committed suicide. In addition, they’ve confirmed the 34-year-old Diplomat had been stabbed 12 times in the abdomen and his throat had been slashed. However, they state some of the wounds were “hesitation wounds”, that apparently were self-inflicted by the Diplomat.

The body was discovered by Mercado’s driver, who was going to take him to a UN Convention on Thursday morning. Mercado was reportedly fully clothed but without shoes, at his apartment in Grand Concourse at the Bronx. Hair samples have been discovered from Mercado’s hands and two knives were in the bathroom sink.

Surveillance cams were not working at the time on Mercado’s apartment building. The Diplomat was last seen alive on Wednesday around 3 o’clock.

“We’re working together with the Police and the State Department. We want to find the ones responsible for this crime”, some people from the Nicaraguan Mission highlighted on Friday.

According to the digital version of the Daily News, however, the Police found 10 hairs on his right hand and another 5 in his left hands, which suggests the Diplomat had a fight with another person.