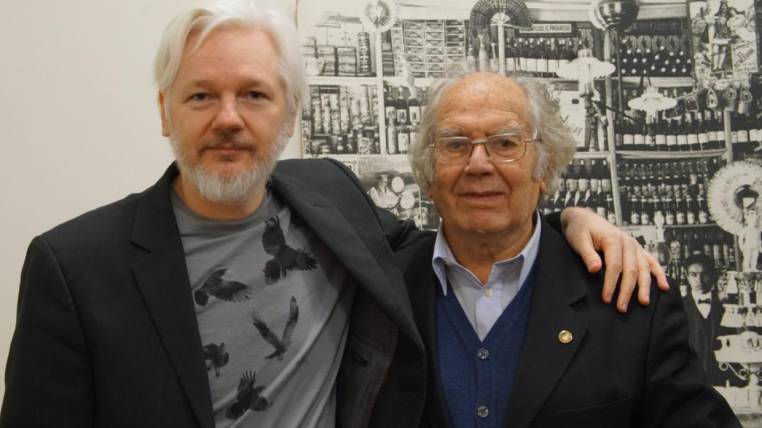 Australian activist Julian Assange received on February 7 the visit of the Argentine Adolfo Pérez Esquivel, Nobel Peace Prize winner in 1980, at the Ecuadorian embassy in London, where the founder of WikiLeaks has been a refugee for more than five years.

In a message on Twitter, Assange declared himself “honored” for having dialogue with Pérez Esquivel, “who was imprisoned in Argentina, Ecuador and Brazil,” he said. Esquivel, who has expressed his support for Assange on several occasions, “is an inspiration to me and to many others” and “continues to do an impressive job,” Assange stressed.

According to the British local agency PA, the American actress Pamela Anderson also visited the Australian on 7 February, the day after a British court denied the request of her lawyers for the United Kingdom to withdraw the request for detention that weighs on him if leave The actress, dressed in a black dress and dark glasses, entered the embassy of Ecuador with two cups of disposable coffee, according to that source.

Assange took refuge in the Ecuadorian legation in 2012 to avoid being extradited to Sweden, which demanded him to answer for alleged sex crimes. Stockholm closed that investigation last May, but the United Kingdom maintains an arrest warrant against Assange for failing to comply with the terms of his parole.

When he retired to the embassy, Assange stopped appearing before the court that required him, which can carry a penalty of up to one year in prison in the United Kingdom. The activist says that if he is arrested an extradition order could be activated from the United States, which could question him about the thousands of secret documents he revealed through the WikiLeaks portal. (I)