Number of affected areas in Yasuní is less than expected, according to President Correa 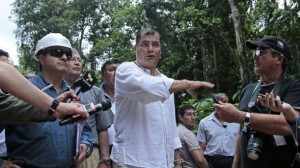 The number of acres that will be affected with the oil works is less than what was initially expected, explained President Rafael Correa, after going to the Yasuni along with national and international journalists to verify that high technology is being applied for the environment impact.

He explained that each oil platform occupies 3.5 hectares and not 60 as remarked by environmental groups.

He also criticized the position of Yasunidos, who “from Quito, with all basic services, fridges full of food and wifi, they want to ban the use of our oil.” The group resorted two weeks ago to the Inter-American Commission on Human Rights (IACHR) to report an alleged repression of indigenous rights.