Okunoshima, the kingdom of the long ears and cotton tails 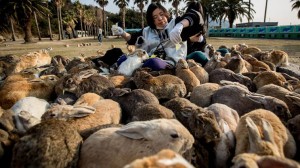 The Rabbit Island , is the nickname by which is known the small floating island of Okunoshima that floats in the internal Sea of Japan between Hiroshima and Shikoku. This used to be a secret military base where poison gas was manufactured during World War II, but in 1971, after a group of schoolchildren freed eight rabbits, it would be known differently.

Currently, there are more than 300 mammals with long ears that inhabit the island of 700 square meters, which is known in Japan as “Usagi Shima” or Rabbit Island.

This island has become a tourist destination to observe and live with animals, as even some travel agencies, within their tourism plans offer the tour called “Let’s play with the rabbits.”

Although they are wild, rabbits live on the island with humans and they come in droves to visitors looking for something to eat, especially in the colder months when their natural food sources are scarce.

Visitors can pet the “wascally wabbits”, although children must be supervised by an adult. Dogs, cats and other pets are not allowed and the entry cost excluding transport by boat is 17,020 yen ($ 219.50 USD).