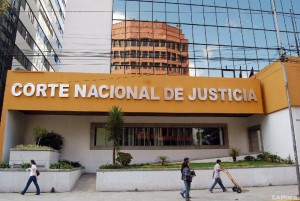 Ombudsman requests the no politicization of the legal process of crimes against humanity against members of the AVC group.

The Ombudsman joined the criticism of the military high command for attending the trial hearing for the alleged crime against humanity that took place on November 9 in the National Court of Justice (CNJ for its Spanish acronym). This, however, was suspended until a new date is set.

The body asked not to politicize the process and not to “criminalize before the public those who were victims of serious human rights violations” as detailed in the report of the so-called Truth Commission.

Through a statement, the Ombudsman, Ramiro Rivadeneira, urged that this case remains “strictly judicial avoiding any pressure measure affecting the independence of the judicial authorities.”