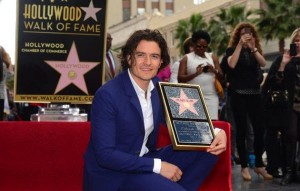 Orlando Bloom did not stop smiling and thanking his fans

Surrounded by his fans, the actor from Pirates of the Caribbean and The Lord of the Rings, received his star, 2521, at the walk of fame in Hollywood.

In an emotive ceremony, Bloom, who was dressed in a casual blue suit, did not stop smiling and thanking his family for their support during his career. The British actor was accompanied by his son Flynn, from his relationship with model Miranda Kerr, from who he is separated now, and to whom he dedicated a few words for giving him the best present ever: their son.

At the ceremony were also actors Forest Whitaker and David Leveaux.