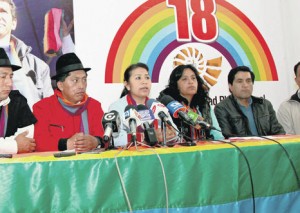 The leadership of Pachakutik announced yesterday, at a press conference, that will not allow that Jimenez becomes a person deprived of liberty in any centre of social rehabilitation of the country, also they will not provide information on the whereabouts of the Assemblyman.

“For obvious reasons, we will not say where is (Jimenez)”, he added the prefect of Zamora Chinchipe, Salvador Quishpe, but clarified that he is being cared by the indigenous communities of the Amazon. Jimenez was considered one of the brave men that have the country by not being discouraged to Government pressure and do their job of Assemblyman and denounce acts of corruption.

Also the wife of Jiménez, Rocío Alba, in the Conference Room of Pachakutik, called on the Government to “stop harassing my family”, with breathy voice and tears.

The Assemblyman was sentenced to 18 months in prison, a fine of USD 140 000 and public apologize to President Rafael Correa by offending him.

IESS changes the resolution of compulsory affiliation to voluntary

Command Center controlled the conduction of the elections