Paez Delivers a Report of Irregularities in the Constitution 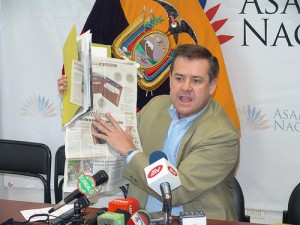 Assemblymen of Izquierda Democratica (ID), Andres Paez delivered a document to the controller of General State, Carlos Polit. The folder contained information of corruption facts during the elaboration of the new Constitution in Montecristi.

The document will also be delivered to the State Attorney General, so that they establish the legal penalties for the felonies committed. One of the irregularities is that Francisco Torres, former administrator of the Constituent Assembly and current Parliament administrator, requested some equipment to the companies of Communications HG and ACCESPAT; however both companies did not existed.

Francisco Torres and Carolina Navas, the administrative director of the Constituent Assembly, do not remember who gave them the documents. In a communication of Quito, Navas confirmed that she is not a public servant and thus she could not make any contracts for the Assembly in Montecristi. However this is false since she did sign a document that establishes her as public servant and manager of the CREA Communication Company.

Paez also discovered that several officials of the Constitution did not paid their taxes, this event was already investigated by the IRS director, Carlos Marx Carrasco, who assures that he has not been notified on anything in particular about this.

Fierce Storm Forced the Cancellation of Thousands of Flights in U.S.