Passengers Wearing Strips Will be Reported 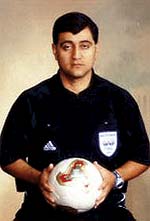 “Aerogal has accomplished all the security requirements to guarantee a secure flight. We’ve been helping authorities in the Moreno case,” said Gabriela Sommerfeld, airline executive president.

The statement was made yesterday in Guayaquil, to refute claims about the company letting pass the former soccer referee Byron Moreno, who is currently detained in the U.S., without taking proper precautions. There are 5 filters travelers have to pass before entering the pre-boarding lounge.

Airline’s responsibility consists on checking documentation, Fly Security software selects certain passengers who must be checked manually. Also, ensuring the compliance of the procedure for luggage loading through the anti-explosive and drug detection with dogs.

“Moreno was manually inspected before boarding the plane, he was selected by the software, skipping private parts, that’s forbidden.”

After a supervisor checked Moreno, another security agent checked him afterwards to ensure he was wearing a strip because he had had esthetic surgery recently. “There is no video but there are witnesses of the second control and flight previous passport check” said Sommerfeld, who also added that from now on every person who travels wearing a strip will be reported to the Anti-narcotic unit.