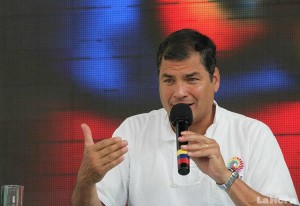 Rafael Correa, president of Ecuador, admitted that due to the collapse of oil prices and the appreciation of the dollar, the Ecuadorian economy may register zero growth or even contract in 2015.

“We’ve withstood greatly, but obviously since we have been unable to prevent (an impact) in the real sector. We are reviewing our growth expectations, and maybe this year ww will not grow or we´ll decrease,” said the president at a news conference with foreign media.

If the forecast happens, it would be the first time that the Ecuadorian economy would result in a negative balance since the arrival of Correa to power in 2007.

“W we were not able to maintain the dynamism we wanted in the real sector. The country, if the level remains (current oil price), will lose 7,000 million dollars,” which account for 7% of the Ecuadorian GDP, Correa said.

SP and PIC join the march of Alvaro Noboa