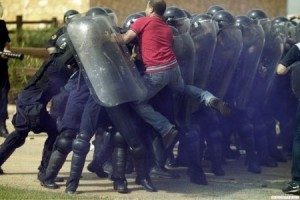 Today, the peaceful protest got extinct in Egypt. Pro and anti-Mubarak groups have maintained for several hours a pitched battle in Tahrir Square.

With a very violent attitude, supporters groups of the president have entered into the central square and have sparked a clash with sticks and stones. The pro-Mubarak group has bursted in the Tahrir square, despite the cords of the Army where the protesters against the regime had remained since last Friday peacefully. Anti-Mubarak are not willing to withdraw from the streets until the president leaves the power, but the Pro-Mubarak are willing to take them out fighting with fists and stampedes. The opposition and the national and international journalists assured that those who attack are Mubarak police dressed in civilian cloth.

The regime has refused to give way immediately to a transition as was requested by the international community, which has also already reacted to the outbreak of violence.

While Mohamed El Baradei, Nobel Peace Prize said: “I’m extremely concerned, I mean, this is another symptom, another indication, of a criminal regime using criminal act… Mubarak does not want to listen to the people, does not want to understand that they need to go… My fear is that it will turn into a bloodbath.”