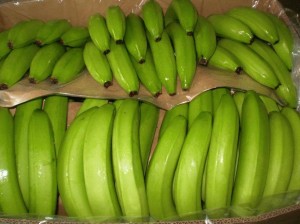 El Oro – Babana producers complain about the failure to pay the official price of the banana box and also accuse exporters for implementing a system to lower prices.

Small banana producers are tired of the exporters blackmailing them. Although the official price is $ 5.40 per box, they get paid less.

Luis Robles, banana producer, said the official price will drop a dollar in the box and get to $ 4.40.

Many choose not to report names for fear of reprisals.
Producers accuse exporters to implement the system’s change to lower prices.

40 of the 144 banana exporters from El Oro are being targeted by the Ministry of Agriculture for violating the official price of the banana box.

Therefore, clearly calling for reform of the Production Code that includes a regulation that protects the farmer with a contract that should not be less than one year.

With the reforms, no complaints need to be written, as reported by the Secretary of Agriculture, Rafael Guerrero.

The regulations to the law of bananas will be presented next Monday (December 20th) at a joint meeting between representatives of the official sector, producers, and exporters at the seat of Guayaquil Zonal government.

The regulation will come into effect once it is sanctioned by President Rafael Correa.
Source: Ecuavisa