Banana producers from the provinces of Guayas, Los Ríos and El Oro requested, from the early hours of this Monday, the government of Guillermo Lasso to declare an emergency in the sector due to the impact of the war between Russia and Ukraine, and to carry out the immediate purchase of the oversupply of fruit through a contingency fund. 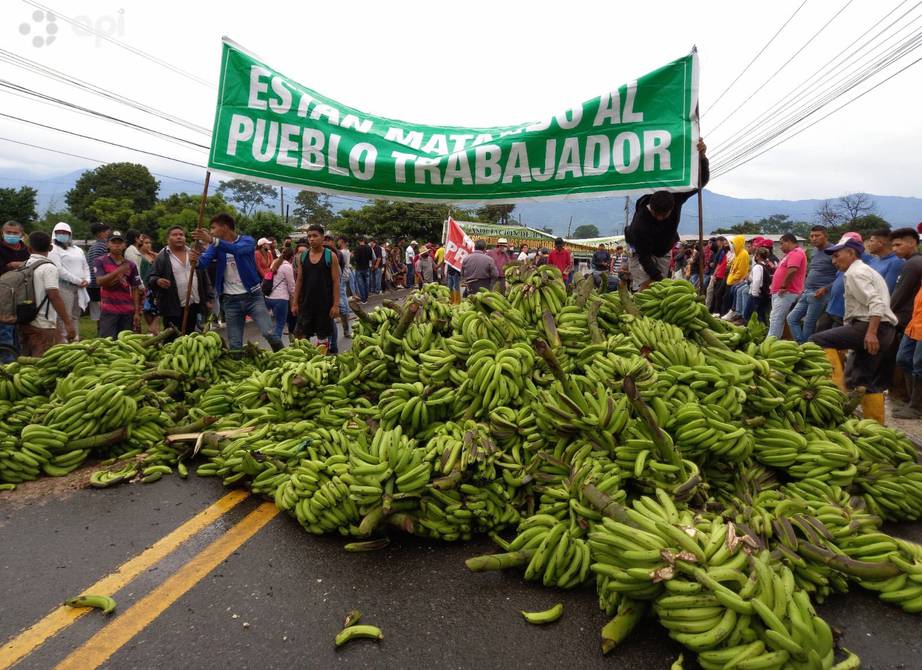 With banana bunches, producers from the provinces of Los Ríos, El Oro and Guayas closed the road to Puerto Inca, to demand that the president declare an emergency in the sector, in addition to requesting that the oversupply of the product be purchased.

In the Puerto Inca sector, in Guayas, the road with the bunches was closed so that the Government listens to their requests. Leaders of the National Federation of Banana Growers of Ecuador (Fenabe) pointed out that around 10,000 clusters per day will be taken to the highways of each banana province so that they are available to all citizens.

“What future are we going to give our children if the government does not support us, we are helpless. Only our Heavenly Father has us alive, because the Government is killing us, we already look like Russia and Croatia. All you have to do is come with a machine and dig a ditch to bury us. The sack of compost, $62; gasoline, $4; diesel, expensive; a liter of Gramoxone went from $4.50 to $8.50. What help is the government talking about if it marginalizes us poor people to the point of saying enough is enough?” said Julio Vázquez, a producer from Guayas.

He complained that the official prices of the fruit box of $6.25 are not paid. “I have to leave bananas for fifteen days so that they pay us a miserable dollar (with) thirty (cents) and this Mr. Lasso says that with a dollar he eats; I don’t know how, if a breakfast costs a dollar fifty, a dollar eighty, a lunch two dollars fifty, a snack two dollars, what dollar are you talking about? He talks about the loans he is making, but where is the money going to come from to pay them if the farmer is worthless to anyone…”, he rebuked.

He proposed that the regime buy a million bunches a week with the extra money received from the high price of oil, which exceeds $100. “We are harmed by the war and the State is benefiting from high oil prices,” Indian.

Before the conflict, approximately 1,800,000 weekly boxes of bananas were destined for Russia and about 180,000 for Ukraine.

Exporters have requested that the public and private sectors work hand in hand to mitigate the impact of a force majeure conflict.

The Ecuadorian Federation of Exporters (Fedexpor) divides the affectation into three levels. In the commercial area, it establishes that the losses of exports to Ukraine are already at $ 2.5 million per week and that there is a reduction in the forecast of shipments to the Eurasian economies that can reach 90% in products such as bananas, flowers and shrimp.

In terms of logistics, with the complete closure of access ports to Ukraine together with delays and announcements of the suspension of transport operations to Russia, plus the loss of value of the Russian ruble, Fedexpor mentions that this makes the products of the exportable supply more expensive of Ecuador and that the economic sanctions in force for Russia put at risk the collection transactions through the international payment system.

This Monday, at 2:30 p.m., Pons will participate in a meeting together with the holders of the Agriculture and Foreign Trade portfolios, with whom he hopes to define measures to deal with this crisis. (I)

Ivonne Baki: “It seems that taking away their visa is the only way for people to react”