The Swiss group  Barry Callebaut,  one of the main manufacturers of cocoa and chocolate, inaugurated this Thursday a project for the construction of an export matrix in  Ecuador , the third largest producer of cocoa beans in the world. 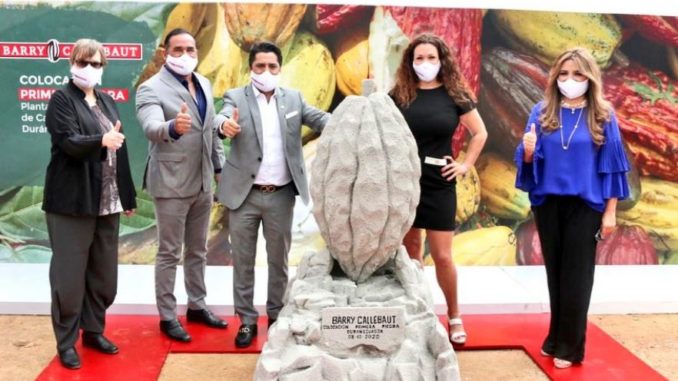 In an event to lay the first stone of this project in the municipality of Durán, in the coastal province of Guayas, executives of the Swiss giant and local authorities discovered a large sculpture shaped like a cocoa pod, as a symbol of the potential that their grains represent in the Ecuadorian export.

“This event is the first step of a trip to Ecuador,” said the general manager of Barry Callebaut in the country, Angela Gubser, who indicated that the company will create 40 jobs and promote alliances with suppliers, exporters and producers.

The board of directors, who traveled to Ecuador for the first time twelve years ago, recalled how they were then impressed by the knowledge of cocoa cultivation by small farmers, which gave them the clue of the “enormous potential” that this product had.

In the last three years, the firm maintained a small branch for the export of cocoa, an activity that started in January 2018, and which now leads to the construction of its own operating headquarters in Durán.

The South American nation has become one of the fastest growing cocoa producers in the last decade and is expected to reach 400,000 tons in the next three years, according to the company.

The Minister of Production, Foreign Trade, Investments and Fisheries, Iván Ontaneda, stressed that “Ecuador has witnessed the momentum that the cocoa sector has had,” which moves 800 million dollars and generates 150,000 direct jobs.

He recalled that it is the first fine cocoa exporting country in the world and that in recent years it has been developing industry and research, thanks to which a highly productive variety was developed.

The minister recognized the role of small cocoa growers in plots of three or four hectares, which represent 90% of all producers.

In line with his work, he mentioned that Ecuador is precisely the country where the highest price is paid to the producer, since 92% of it goes to these day laborers in order to improve “economic income, their productivity and quality of work. lifetime”.

For his part, the vice president of supply and cocoa at the Swiss manufacturing company, Roman Muegler, reviewed how cocoa historically revolutionized Ecuador’s economy and gave value to a “highly prestigious raw material” that led Barry Callebaut to become a “Faithful buyer of Ecuadorian grain” since 1996.

The Swiss ambassador, Rita Hammerli, also intervened at the event, who indicated that the new facility will not only allow the firm to benefit from the “excellent cocoa from Ecuador”, but to turn it into a sustainable product while supporting local farmers.

The diplomatic representative highlighted the context for investments facilitated by Ecuador’s trade agreement with the European Free Trade Association (EFTA), which came into force last June, and which will allow the country to consolidate in the non-EU European market.

Based in Zurich, the Swiss Barry Callebaut group is one of the leading manufacturers of high-quality cocoa and chocolate products, with more than 12,000 employees spread over more than 40 countries, operating in some 60 production sites. EFE (I)

Ecuador opens the stage of regularization of banana producers