Prosecutor ‘analyzes legal actions’ after the revocation of preventive detention in favor of Pabón, Hernández and González

The Prosecutor’s Office reacted to the decision of the subrogant judge of the Pichincha Provincial Court of Justice, Patlova Guerra. The entity sent a press release the morning of December 25, 2019. 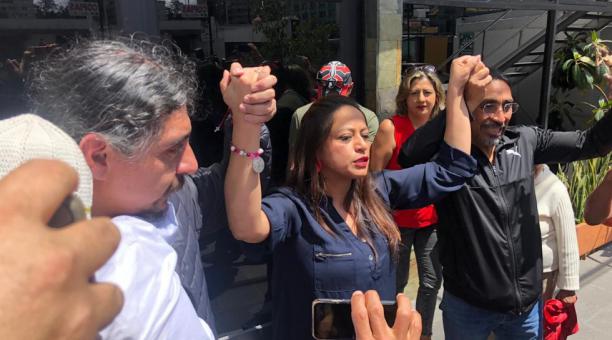 Prosecutor ‘analyzes legal actions’ after the revocation of preventive detention in favor of Pabón, Hernández and González

The document indicates that he will analyze the legal actions after the revocation of the preventive detention in favor of the prefect, Paola Pabón, of the ex-legislator Virgilio Hernández and of the activist Christian González.

According to the Prosecutor’s Office, the revocation occurred despite the fact that elements of conviction were exposed that would demonstrate that the defendants would have participated in an “alleged ignorance of the Constitution and attempt to overthrow the Government”.

In addition, he defends his request for pretrial detention against those investigated “because the other precautionary measures are insufficient.” For this reason, “it will analyze the legal actions that it will take in accordance with the provisions of the penal type of Art. 268 of the Organic Integral Criminal Code, which sanctions the crime of prevarication”.

The articles referred to by the Office of the Prosecutor sanctions judges up to five years in prison against express law, to the detriment of one of the parties. The judge who makes a decision against the law “does what he prohibits or fails to do what he commands” also incurs in this conduct.

Pabón, Hernández, González and a fourth person are investigated for the alleged crime of rebellion. On October 14, the Prefect was captured by agents who raided her home in Quito, at the request of the Prosecutor’s Office. On November 5, Judge Julio Arrieta accepted the Prosecutor’s approach, and linked Hernández to the criminal case.

Migrants will defray via postal or digital methods