The Pichincha Prosecutor’s Office has notified the indigenous leader  Leonidas Iza  that it has initiated an investigation for the alleged crime of  destruction of the cultural heritage of the city of Quito, and has asked him to designate a judicial address for future notifications. 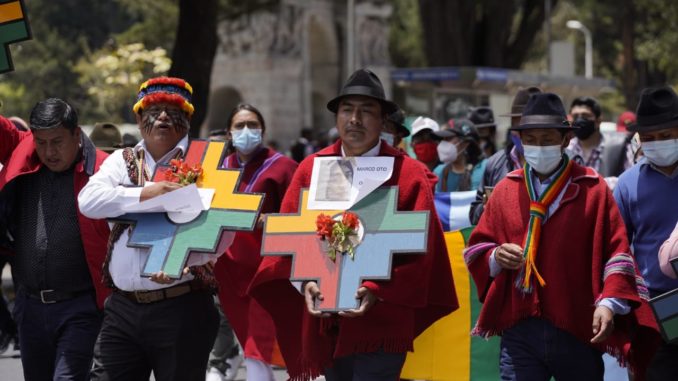 Although the ruling does not specify the facts, Iza’s lawyer, Carlos Poveda, has said on his Twitter account that the prosecutor’s inquiry is related to the violent protests led by Iza in Quito on October 12, 2020, when an attempt was made to tear down the statue of the queen of Spain  Isabel la Católica .

“The statue is more important to the Prosecutor’s Office, than 11 dead, 1,500 deprived of liberty, 600 injured. The complaint against humanity will continue to wait for a third country. SELECTIVE JUSTICE. The next step… Arrest of leaders and acquittal in political trials, ”Poveda tweeted.

On the afternoon of October 12, a group of indigenous protesters led by leaders  Leonidas Iza  and  Jaime Vargas , caused incidents in the vicinity of the statue of Queen Isabela la Católica, in Quito.

In the vicinity of the statue, Iza gave a speech in rejection of the Spanish conquest. There a group of people with combos, ropes and chains were posted; They vandalized the statue with paintings, eggs and assaulted police officers, who used tear gas to disperse the protesters.

Julio Muñoz: “Thanks to the Ecuador Digital policy, the country was prepared to face the health emergency”