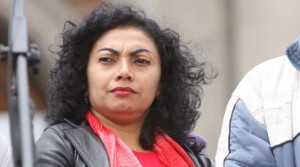 he Attorney General’s Office said yesterday in its Twitter account @FiscaliaEcuador, that an investigation would have been initiated into the case of adissemination of alleged private of images of Mery Zamora in social networks.

The former leader of the National Union of Teachers reported yesterday that the disseminated pictures, mainly in Twitter, would be edited and stressed that “she has been the victim of hatred and persecution” by the government.

The fact sparked outrage among the internet users and as a result, politicians from left and right repudiated the dissemination of Zamora´s pictures.

Political figures expressed their rejection to the act, including Martha Roldós and Alberto Acosta, who described the incident as “despicable.”