Former Vice President María Alejandra Vicuña was received on Monday, January 6, 2020 by a dozen supporters, while entering the National Court in Quito . The same happened when he reached the auditorium, on the eighth floor. 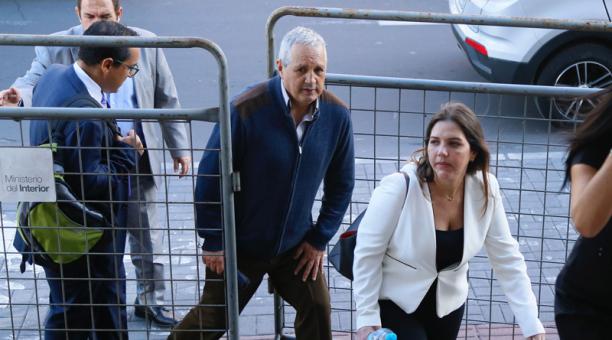 Her co-clappers applauded her, hugged her and shouted slogans. “The united people will never be defeated,” they said again and again. The cops asked to be silent, but they continued. Vicuña went to her post and spoke with her lawyer. It was 09:10.

20 minutes later, the Criminal Court, made up of Judges Marco Rodríguez, Daniella Camacho and Wilman Terán, set up the first day of the trial hearing against the second president, which is prosecuted within the Tithes case.

Vicuña is accused of being the author of the alleged crime of concussion . In the Criminal Code (art. 281), that wrongful act is imprisoned for three to seven years.

At the beginning of the proceedings, the subrogated prosecutor, Wilson Toainga , detailed the elements found in the investigation. He said that it all started with an affidavit that he made, before a notary, the ex – advisor of Vicuña, Angel Sagbay.

In that document it is said that while Vicuña worked as an assemblyman for Guayas , between 2011 and 2013, he asked for money from his collaborators in exchange for maintaining his positions in the Legislative.

The judicialized office also mentions that the money was destined to cover the expenses and events organized by the Alfarista Bolivarian Alliance movement (ABA).

The Prosecutor’s Office said on Monday that the record shows that Sagbay and other collaborators of the then assemblyman deposited “illegal economic contributions.” In addition, he said she “abused her position as a public official.”

According to the inquiries, he would have received a total of USD 43 295 and that only the ex-advisor gave him USD 23 300.

The Prosecutor’s Office said the contributions were illegal, since ABA is not registered with the National Electoral Council and does not keep an accounting. The lawyer of the former official, Ana María Ontaneda, rejected that argument and indicated that the political organization does exist and that they constantly give workshops and hold events.

Shortly before noon, Sagbay went to the hearing to testify before the Court. Before beginning his speech, the rapporteur, Marco Rodríguez , asked him to raise his right hand and asked him to tell the truth, because he was under oath.

In his account, the ex-advisor indicated that while working in the Legislature, he delivered monthly, in the personal account of Vicuña, amounts between USD 300 and 1,400. In addition, he stated that the value varied depending on the position he held. In 2011 he served as an assistant and a year later he was an advisor.

He assured that the delivery of the money was obligatory and if he did not contribute he should leave the position.

In addition, during the interrogation conducted by lawyer Ontaneda, the ex-advisor said that between January and August 2018 he held conversations through WhatsApp with two advisors of the then Vice President Vicuña. Those messages were submitted to a expertise in the Criminalistics laboratories. The agent who carried out that analysis yesterday gave his testimony before the judges.

According to these conversations, Sagbay asked for “help” to get a position in the public sector , but he did not succeed. On August 26 of that year he sent another message and asked them “for the last time to help you with a position in the Vice Presidency of the Republic ”.

The investigation determined that after that refusal he requested that the money delivered be returned . A month later he filed the complaint . After the testimony came a break. Then, Vicuña said that he has not committed any crime, since the contributions delivered were voluntary and without threats.

Five facts you should know about dollarization in Ecuador

Jubilous3D uses cutting-edge technology at the service of the community