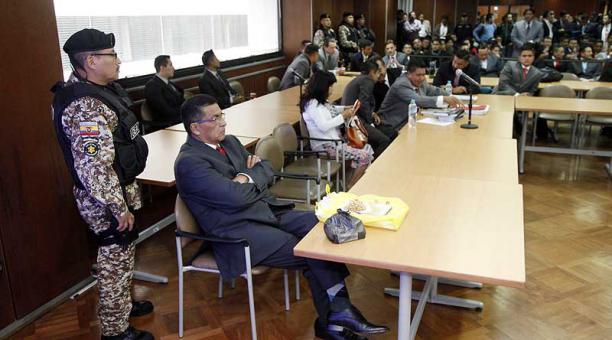 15 agents descended from a state bus, shortly before 09:00. The first to appear was the general Fausto Tamayo, former commander of the institution. He arrived handcuffed, but tried to cover the metal with the sleeves of his jacket. Next, Alexis Cifuentes, an officer with more than a decade in the pólice, descended. Both of them were marked as the ringleaders of the criminal structure dedicated to processing passes in exchange for payments between USD 1,000 to USD 2,000, between 2014 and 2015.

Tania Moreno, provincial prosecutor of Pichincha, yesterday used a chart to explain how the criminal network was organized. Photographs of Tamayo and Cifuentes were at the top of the drawing. “They exercised the command,” she warned the three judges who make up the tribunal. Below the two soldiers, other agents appeared, between officers and men. One group was entrenched in the leadership of passes and another was responsible for the illegal supply in detachments, according to the prosecutor. With Moreno´s exposure, which lasted about 20 minutes, the adjudication hearing began, the final phase of the investigation of this case that broke out on July 1, 2015. The suspects were indicted by the organized crime, a crime punishable by up to 10 years in prison