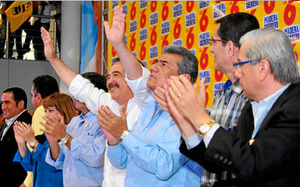 Jaime Nebot goes for the re-election in Guayaquil

Partido Social Cristiano (PSC) announced yesterday that Jaime Nebot and Cesar Rohon will be their candidate for the mayor of Guayaquil and the latter for the Guayas prefecture, during the party’s national assembly.

Jaime Nebot has worked as mayor of the port metropolis since 2000 and will launch his third term. While Rohon served as constituent Assemblyman by the PSC in 2007-2008.

During the meeting held in the Convention Center of Guayaquil, the party also appointed other candidates for the sectional elections of 2014.

CNE has defined the campaign budget ceiling for sectional elections